In the study, which was published in Clinical and Translational Gastroenterology, nearly 1 in 6 people diagnosed with pancreatic cancer were found to have an inherited cancer-related gene mutation that likely predisposed them to the disease. The most common genetic mutation was in the BRCA2 gene, known as a “breast cancer gene.”

“We found that the patients who had one of these genetic mutations — especially if they were mutations in homologous recombination repair genes, including BRCA2 — had a 50% chance of better survival than the people without that genetic mutation,” says Niloy Jewel Samadder, M.D., a Mayo Clinic gastroenterologist and hepatologist, and the study’s senior author.

“For example, two of the patients with better survival were treated with PARP inhibitors, which are designed to work on the BRCA pathway,” Dr. Samadder says. “And one patient who was diagnosed with Lynch syndrome was treated with immunotherapy for their advanced disease and showed successful stabilization of their disease.”

Pancreatic cancer is a leading cause of cancer deaths, with a five-year survival rate of just 10%. Nearly 60,000 people in the U.S. were diagnosed with pancreatic cancer in 2020, and more than 47,000 died, according to the American Cancer Society.

For the study, 250 patients who were diagnosed with pancreatic cancer were tested with a sequencing panel that included more than 80 cancer-causing or predisposing genes. In comparison, standard panels for pancreatic cancer only include 20 or fewer genes.

The patients with pancreatic cancer were part of a larger cohort of 3,000 patients involved in the two-year Interrogating Cancer Etiology Using Proactive Genetic Testing study, or INTERCEPT, and were newly diagnosed with various cancers at Mayo Clinic Cancer Center locations in Arizona, Florida and Minnesota.

Dr. Samadder says nearly 30% of the genetic mutations in the patients with pancreatic cancer would not have been detected if relying on prior standard guideline-based approach to genetic evaluation.

He says data from this study and others, showing the high rate of genetic mutations in pancreatic cancer, have led to recent changes in guidelines that advocate for genetic testing for all pancreatic cancer patients, regardless of their cancer stage or family history of cancer.

“If we know that there is a genetic predisposition to pancreatic cancer, those patients, and their family members, could be screened more closely, using imaging or blood markers to identify early and potentially curable pancreatic cancer, ” Dr. Samadder says.  “Uncovering hidden inherited genetic mutations using a universal testing approach can save lives.” 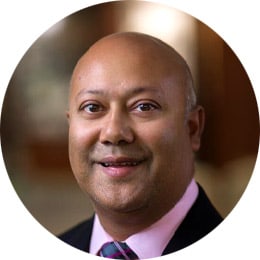 Dr. Samadder is a Mayo Clinic gastroenterologist and hepatologist in Phoenix, Arizona.