Mayo Clinic scientists lead the way on research into diseases of aging and their link to stressed or damaged cells that linger and cause chaos in the body. Called senescent cells, these cellular zombies have been ordered by the body to stop dividing but continue to pump out inflammatory signals and disrupt the function of the cells in their neighborhood. They have been linked to many conditions such as osteoporosis, neurodegenerative and cardiovascular diseases as well as cancer.

While potential therapies spearheaded by Mayo Clinic scientists to remove senescent cells have reached the first stage in human clinical trials, there is much more to learn about these damaged cells and their effects on disease processes. Researchers at Mayo Clinic are working to map, clarify and chart how senescent cells contribute to disease so they can make informed decisions on what potential treatments to explore.

Mapping The Cellular Ecosystem, Cellular “Badlands” and All

How many senescent cells are present in the body? How do they differ from tissue to tissue type in the body? How do they distribute themselves within a tissue? Are there some cell types more prone to becoming senescent than others? Those are all questions researchers hope to answer in a new project called The Cellular Senescence Network. Funded by the National Institutes of Health, teams across the country are collaborating to create a senescent cell atlas for the human body.

As part of the project, a team of Mayo researchers led by Mayo Clinic scientist Joao Passos, Ph.D., are tasked with developing an artificial intelligence (AI) based software program that will allow quick identification of senescent cells and where they congregate in tissues. Since they disrupt neighboring cells and the extracellular space, mapping these cellular “badlands” can provide insight into how senescent cells contribute to tissue dysfunction.

Identifying and quantifying senescent cells in tissues is not an easy task. There is no single identifier for a senescent cell, so scientists use multiple markers simultaneously. Also, quantification of senescent markers in tissue samples is extremely time consuming. It requires manual quantification, and Dr. Passos and his team spend weeks to months on that aspect of their work.

This challenge  prompted the team, particularly molecular biologist Anthony Lagnado, Ph.D., to develop an AI-based software capable of identifying these cells faster and more accurately than the human eye.

In collaboration with Mayo Clinic’s Biomedical Imaging Resource Core led by David Holmes III, Ph.D., the team is currently training AI models so that one can identify senescent cells in different tissues as well as making the software user-friendly so that the scientific community at large can easily identify and quantify senescent cells. It is Dr. Passos’ hope that the software could eventually be used as a diagnostic tool or as a way to test the efficacy of anti-senescence therapies.

Diving Deeper, Identifying DNA Where it Should Not Be

Dr. Passos and team, along with collaborators at the Sanford Burnham Prebys Medical Discovery Institute, are also investigating mechanisms driving inflammation that occur with aging and play a key role in senescent cells. In a new paper, they’ve reviewed the different types of DNA that show up in the wrong place and are linked to conditions like cancer, neurological disorders, and cardiovascular disease.

In general, DNA is contained in the cell’s nucleus or mitochondria. When it is discovered floating around in the cell’s cytoplasm, the immune system might mistake it for viral or bacterial DNA and ramp up an immune response (inflammation). In the paper, published in the journal Cell, the team defines and clarifies this floating DNA into four groups:

Each of these types of DNA has a place where they do their job. But when outside of their “cellular office,” these nucleic acids risk misidentification by the immune system.

Dr. Passos’ team is currently  investigating the mechanisms that lead mitochondrial DNA to be released into the cytoplasm and how this mislocated DNA contributes to aging and age-related disease. 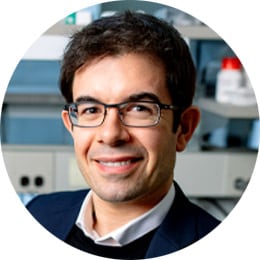 Dr. Passos is a scientist at Mayo Clinic in Rochester, Minnesota.